ICSE Economics Applications 2015 Paper Solved Class-10 Previous Year Questions for practice so that student of class 10th ICSE can achieve their goals in next exam of council.  . Hence by better practice of Solved Question Paper of Previous Year including 2015 is very helpful for ICSE student.

By the practice of ICSE Economics Applications Paper Previous Year you can get the idea of solving. Try Also other year for practice. Visit official website CISCE for detail information about ICSE Board Class-10.

Section – A [40 Marks]
(Attempt all questions from this Section)

(b) Why is capital called a ‘produced means of production’? [2]
(c) State two assumption of the Law of Supply. [2]
(d) What is the difference between a loan and an overdraft? [2]
(e) State any two drawbacks of State enterprises. [2]

(c) Two assumptions of the law of supply are:

(e) Two drawbacks of state enterprises are as follows:

Answer :-
(a) The two factors on which supply of labour depends are:

(c) Two primary functions of money are as follows:

(d) Monopsony is the market situation in which there is a single buyer who purchase the whole commodity. Sellers may be one, few or in large numbers. This situation is very rare in the market.
For example—A coal mine may be the only employer who demands the services of coal-mines in a region.

(e) Fiscal Policy: This refers to the revenue and expenditure policy of the Government of any country. The instruments of fiscal policy are public expenditures, imposition of taxes (and changes in tax rates), provision of subsidy, public debt etc.

(a) State the market form of the following commodities:

(b) What is meant by shifting of tax burden?
To which tax is this relevant?   [2]
(c) A consumer purchased 10 units of a commodity when its price was Rs. 5 per unit. He purchases 12 units of the commodity when price falls to Rs. 4 per unit. Calculate the price elasticity of demand for the commodity. [2]
(d) State two ‘active’ factors of production. Give reasons to support your answer. [2]
(e) Differentiate between Floating and Sunk capital. Give an example for each. [2]

(d) Labour and Entrepreneur are two active factors of production. Land and capital can be used only when labour is employed on then.
No doubt, all factors are important in production because production results from cooperation among all the productive resources, yet labour is regarded as the single most important factor of production.

(a) State two advantages of opening a bank account. [2]
(b) ‘The role of the State is important in developing the economic infrastructure of a developing economy’. Give two reasons to support your answer. [2]
(c) State the impact of an increase in Cash Reserve Ratio on loanable funds. [2]
(d) Classify the following types of tax into direct and indirect taxes:

(e) Which of the following is a function of a Commercial Bank? Give a reason to support your answer:

(b) Two Roles of State in Economic Development:

Cash Reserve Ratio: By regulating CRR, the RBI tries to control inflation. In the time of inflation, the Central Bank raises the CRR. An increase in the CRR leads to reduction in cash reserves with the commercial banks. Therefore, commercial banks will not be in position to create only a smaller amount of credit.

Providing cash credit facility: In this case, the entire sanctioned amount of loan by the bank is not given to the borrowers at a particular time. The borrower is allowed to withdraw the sanctioned amount as and when he requires money. The bank charges interest only on the actual amount withdrawn from the bank.

Section – B [40 Marks]
(Attempt any four from this Section)

Answer :-
(a) Division of labour refers to the method of organising production where the work required to produce a product is divided into different specialized tasks with different workers specializing in each task.
The four ways in which Division of Labour will influence production in an economy are as follows:

(b) Law of Demand: The law of demand is based on the law of diminishing marginal utility. This law states the relationship between the quantity demanded and price.
According to Marshall: “The amount demanded increases with a fall in price and diminishes with a rise in price.”
According to Samuelson: “Law of demand states that people will buy more at lower prices and buy less at higher prices, ceteris paribus.”
Demand Schedule: According to Prof. Marshall, “demand schedule is a list of prices and quantities.” It is a tabular statement of price-quantity relationship between two variables. The demand schedule in the table represent the different quantities of commodities that are purchased at different prices during a certain specified period.
Demand Curves: The demand curve is a graphic statement or presentation of quantities of a commodity, which will be demanded by the consumer at various possible prices at a given moment of time. Demand curve does not tell us the price. It only tells us how much quantity of good would be purchased by the consumer at various possible prices. 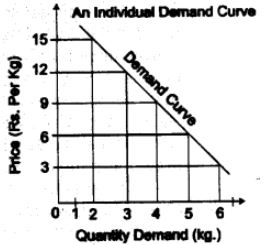 Exceptions to the Law:

(a) What is meant by migration?
Explain three ways by which migration impacts the ecosystem. [7]
(b)

Answer :-
(a) Migration: Cities provide better employment opportunities. There is attraction of city life in view of more comfort s’ and amenities available there. Therefore, a large number of persons migrate from villages and small towns to the larger cities for better prospects. Migration has led to overcrowding in cities. There has been change in the land use patterns to meet the basic needs for sheltering of migrating population.
Three stages of capital formation:

The causes of low capital formation in India are as follows:

Answer :-
(a) Entrepreneur: He undertakes all risks and organise the activities related to the business. He has all the qualities of leadership and an experienced and skilled person to guide and lead a company. He makes plans and gets it implemented. He is resourceful and tactful in order to run the whole organisation. He is responsible for the success as well as for the loss. This is the fourth factor of production. In simple words, the person who takes up the risk and organizes the business is known as an “entrepreneur”. The entrepreneur act as a manager and also takes up the risk of the business, whereas the manager or an organiser only managers the work in a predetermined manner, but he is not liable for any risk or loss in business.
Functions of Entrepreneur:

1. Differences between a direct tax and an indirect tax:

(a) What do you understand by price elasticity of demand? With the help of diagrams explain the conditions when:

(b) With reference to the Central Bank of a country.

Answer :-
(a) Price elasticity of demand is the responsiveness of change in quantity demanded in response to a given percentage change in the price of the commodity. It can be expressed as follows: 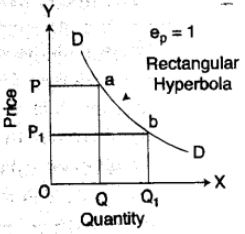 Two reasons for the need of a central bank in a country:

Open Market Operations: It is one of the most important quantitative instruments to control credit. It refers to the sale and purchase of government and other approved securities by the central bank in the money and capital market. When RBI aims at expansion of bank Credit during the period of recession, it purchases securities from the market and vice verse. This is how credit is controlled in both boom and condition of recession.

Answer :-
(a) Perfect competition is a market structure where there are a large number of producers (firms) producing a homogenous product so that no individual firm can influence the price of the commodity.
The characteristics of a perfectly competitive market are as follows:

(a) Read the extract given below and answer the questions that follow:
PTI Jun 15, 2014
New Delhi: The Finance Ministry has asked the Department of Disinvestment to complete the groundwork for sale of shares in state-owned companies soon after the budget to take advantage of the bull phase in the stock market.
The government is expected to retain the disinvestment target of Rs. 36,925 crore proposed in the interim budget for 2014-15.

1. Indicate the degree of elasticity on the Supply curves given below: