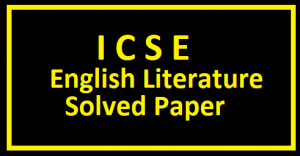 Poetry – Section B ( Not in Syllabus)

Read the extract given below and answer the questions that follow:
Margaret: Here’s the wind!
Winsor: What’s the move now, General?
Canynge: You and I had better see the Inspector in De Levis’s room, Winsor [To the others] If you’ll all be handy, in, case he wants to put questions for himself.
Margaret: I hope he’ll want me; it’s just too thrilling.
Dancy: I hope he won’t want me; I am dog-tired. Come on Mabel. [He puts his arm in his wife’s]
Canynge: Just a minute, Charles.
(i)

Who is Winsor? What does Margaret mean by ‘here’s the wind !’? Where is the scene taking place [3]
(ii)

What does Canynge say to Winsor immediately after the extract? What reply does Winsor give to Canynge? [3]
(iii)

Who enters soon after? What two things had he been asked to do earlier? [3]
(iv)

Who is De Levis? Whom does he suspect for the theft of his money? Canynge also suspects this same person later on. What is the basis of his suspicions? [3]
(v)

How did De Levis have such a large amount of money on him that day? [4]

Charles Winsor was the owner of Meldon Court near New Market. Here Margaret means that they now have a clue as Winsor had said that if there is rain there should be footprints. The scene is taking place in Charles Winsor’s dressing room at Meldon Court.
(ii)

Canynge says to Winsor that they must be careful with the inspector fellow. He may have suspicion on any house member.
Winsor surprises and further says that all this will be disagreeable and even humorous to others.
(iii)

Treisure enters the room. He bad been asked to call Robert and to check if the stable ladder had been moved.
(iv)

De Levis is young and rich Jew in the Meldon Court. He Suspects upon Ronald Dancy one of the guest of Charles Winsor. Canynge also has suspected him as his sleeves were quite damp as if by rain wet.
(v)

De Levis had a large amount of money on him that day in exchange of Rosemary filly, a horse, which Ronny gifted him eqrlier. He sold the horse to Kentman, the bookie, who paid him in cash.

Read the extract given below and answer the questions that follow:
Graviter: No, I suppose not. [A pause] By Jove, I don’t like losing this case. I don’t like the admission we backed such a wrong on.
Twisden: Impossible to go on.
(i)

Who are Graviter and Twisden? What ‘case’ are they discussing? Why does Graviter feel that he will lose the case? [3]
(ii)

What was the latest evidence put forward which convinced them of the thief’s identity? [3]
(iii)

How can you say that Twisden is loyal to his profession? What does Twisden ask Graviter to do immediately after this? [3]
(iv)

What does Twisden advise Dancy to do? Later, in the play, De Levis calls on Twisden. Briefly state what is the purpose of this visit. [3]
(v)

How does Mabel show loyalty to her husband? Mention any one character trait of Ronald Dancy that appeals to you. What happens to him in the end? [4]

Edward Graviter is a solicitor. Jacob Twisden is the senior solicitor. They both are professional partners. They are discussing the case of the stolen money of Mr. De Levis stealing case. Considering upon Gilman’s anonymous admission of theft and the happening of new prosecution Graviter feels that he will lose the case.
(ii)

The latest evidence was that they got the note which was stolen from De Levis. Graviter had got it from an Italian wine merchant Ricardos who said he got it from Dancy when he paid his daughter before he left her to get married.
(iii)

Twisden is quite loyal to his profession as he is quite bound to his professional duty, against good faith of solicitors he can hang deal how big it be. He also propose to inform Sir Frederic about Gilman’s anonymous admission. Twisden ask Graviter to see Dancy at once and to make him a call.
(iv)

Twisden advices Dancy to immediately go to Morocco and to further slip on from there. The purpose of De Levis calling on Twisden is to inform him that he has overheard that a warrant is going to be issued and he has no roll or support in it.
(v)

Mabel shows her loyalty to her husband by encouraging him to go to Morocco and by promising him to stick with him for ever sleep on loving him with same intensity and she will wait until he return from prison. The most appealing character of Dancy is that he is an honest creditable debtor. In the end Dancy commits suicide with a pistol.

Read the extract given below and answer the questions that follow:
One day in early summer Squealer ordered the sheep to follow him and led them out to a piece of waste ground at the other end of the farm, which had become overgrown with birch saplings. The sheep spent the whole day there browsing at the leaves under Squealer’s supervision.
(i)

Who is Squealer? What are we told immediately after the extract? [3]
(ii)

What happens on a pleasant evening, when the animals, after completion of their work, are returning to the farm? [3]
(iii)

Narrate briefly the sight that is seen by the animals in the yard. [3]
(iv)

What is the effect of what they see on the animals? What do the sheep suddenly bleat out? [3]
(v)

‘That evening loud laughter and bursts of singing came from the farmhouse.’
Describe briefly the scene that was seen by the wonderstruck animals. [4]

How do the pigs, under the leadership of Napoleon, cleverly deceive the other animals of‘Animal Farm’ and slowly but surely, take over its ownership, living royally and luxuriously, while the others sweat it out. Give examples from the text to substantiate your answer.

To Sir, With Love : E.R. Braithwaite

Read the extract given below and answer the questions that follow:
“Has he been in any previous trouble?” the Chairman of Magistrates asked.
A probation officer rose and stepped forward.
“No previous record, Sir. The other boy, the victim of the attack, appeared in this court last month before you; that case of the boy who burnt his mother with the hot poker. He’s under a supervision order for one calendar year.”
(i)

Who is ‘he’ in the passage? Where is the incident taking place? Who is the ‘other boy’ mentioned in the extract? [3]
(ii)

What are the charges that have been brought against the accused? [3]
(iii)

What does the Chairman of Magistrates say to the accused?What is the condition of the accused? [3]
(iv)

Narrate the story told by the father of the accused to the teachers about the incident. [3]
(v)

What judgment is passed by the Chairman of Magistrates regarding the accused? [4]

With close reference to a few incidents from the story, show how the class, slowly but surely gets rid of their prejudice against their new teacher. [16]