Position of Metals in the periodic table :

Answer:
Gold and Platinum are the two metals that occur in the free or native state.
The metallic compounds which occur in :

Give the (i) common (ii) chemical nadie (iii) formula of two common ores each of aluminium, zinc and iron.
Answer:

In the stages involved in the extraction of metals in general – give reasons for the following.

(iii) In the froth floatation process, the ore floats on the top & the gangue settles down.
Answer:
The impurities get wetted by water and remain behind in the tank. Since, the ore is lighter, it comes on the surface with the froth and the impurities(gatlgue) are left behind.

(iv) Magnetic separation is not used during the dressing of bauxite ore in the extraction of aluminium.
Answer:
Bauxite is concentrated by Leaching (Baeyer’s process). The impure bauxite is treated with concentrated NaOH, Al2O3 and SiO2 dissolve, but Fe2O3 and other basic materials remain insoluble and are removed by filtration.

Aluminium is highly reactive metal, belonging to the III A group of the periodic table. In nature, aluminium is found in the form of its oxide in its ore.
Hence, Magnetic separation is not used during the dressing of bauxite ore in the extraction of aluminium.

Roasting is a process of converting an ore into its oxide by heating strongly in presence of excess air, so that oxygen gets added to form the corresponding oxide. It is done on sulphide ores in order to remove sulphur as sulphur gets escape in the form of gas.

Whereas in carbonates ores, one needs to drive out carbonate and moisture impurities. So, ore is heated to a high temperature in absence of air. This process is called calcination.

(vii) Roasting the ore generally results in evolution of sulphur dioxide gas, while calcination of the ore evolves carbon dioxide gas.
Answer:
Generally, sulphide ores are roasted, so SO2 is given off.
While carbonate and hydrated ores are calcined, so CO2 or water vapours are given off.

(ix) Oxides or halides of highly electropositive metals e.g. K, Na, Ca, Al are reduced to metals by electrolysis and not by reduction with coke.
Answer:
Oxides are highly active metals like potassium, sodium, calcium, magnesium and aluminium have great affinity towards oxygen and so cannot be reduced by coke.

In the extraction of aluminium from bauxite, the first step is the dressing of the ore by Baeyer’s process. Give balanced equations for the conversion of impure bauxite to pure alumina using a concentrated solution of NaOH.
Answer:
Bauxite (red) contains Fe2O3. and SiO2 as the main impurities. It is crushed to a powder and is treated with a cone, solution of NaOH at 150-200°C (under pressure) when Al2O3 dissolves. 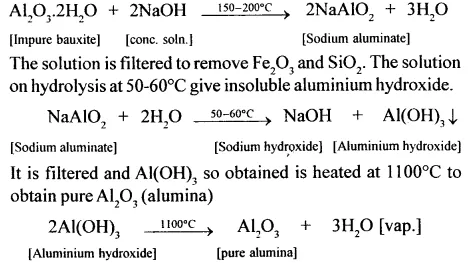 State the function of

Answer:
Functions of :
(i) NaOH : Crushed and powdered bauxite is heated with a cone, solution of NaOH at 150-200°C for 2 hours under pressure. The main impurities present in bauxite (Fe2O3 and SiO2) remain unaffected with cone. NaOH since these are not amphoteric. Bauxite, being amphoteric reacts with the base to form sodium aluminate, which is soluble in water. Thus NaOH helps in the purification of the ore.
(ii) Cryolite :

(a) To increase the mobility of the fused mixture.
(b) To lower the fusion point of the mixture.

Give reasons for the following – pertaining to Hall Herault’s process.

(a) They lowers the fusion point of the mixture i. e. the mixture fuses [melts] around 950°C instead of 2050°C.
(b) They enhances the mobility of the fused mixture by acting as a solvent for the electrolytic mixture.
Thus cryolite in the molten state of subdivision dissolves aluminium oxide.
(c) Addition of cryolite enhances the conductivity of the mixture.
Since pure alumina is almost a non-conductor of electricity

(iii) The layer of powdered coke is sprinkled over the electrolytic mixture because :

(a) It prevents burning of carbon electrodes in air at the emergence point from the bath.
(b) It minimizes or prevents heat loss by radiation.

(iv) The graphite[carbon] anodes are continously replaced during the electrolysis because :

State (i) composition (ii) reason for alloying (iii) one use of each of the following alloys. 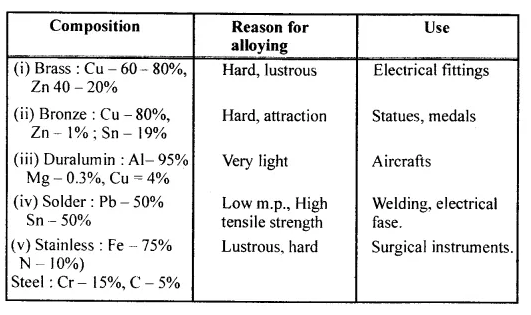