State the number of elements in Period 1, Period 2, and Period 3 of the Periodic Table.
Answer:
Period 1 is the shortest period has 2 elements Period 2 and 3 are short periods have 8, 8 elements.

If an element is in Group 17 [or Group 7A] is it likely to be metallic or non- metallic in character ?
Answer:
Element of group 17 or 7A has 7 electrons in valence shell hence non-metal.

What is meant by a Group in the Periodic Table.
Answer:
Groups : “The verticle columns from top to bottom are called groups.”

How many elements are there in Period 2.
Answer:
There are 8 elements in period 2.

What are elements. Give a reason why elements need to be properly classified.
Answer:
Elements : “Are pure substances made up of one kind of atoms and cannot be broken down into simpler substances.” 118 elements are there.
Reason of classification of elements :

What was Dobereiner’s basis,of classification of elements.
State Dobereiner’s Law of Triads with suitable examples.
Answer:
Basis of classification was that “there was a close relationship between the properties of an element and its atomic mass”.
Dobereiner’s Law of Triads : “When elements are arranged in order of increasing atomic masses, groups of three elements (known as triads), having similar chemical properties are obtained. The atomic mass of the middle element of the triad being equal to the arithmetic mean of the atomic masses of the other two elements.”
Examples : 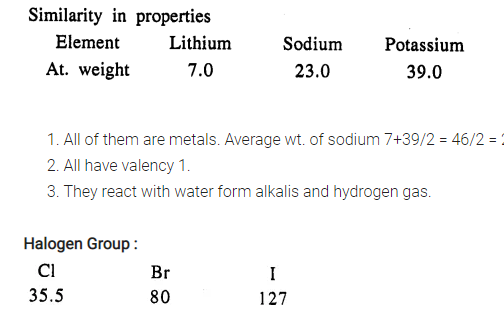 Explain why Dobereiner’s method of classilication of elements did not hold much weightage for future classification.

Reasons for discarding the law of triads :

What was the basis of classification proposed by Newland.
State Newland’s Law of Octaves with a suitable example.
Answer:

If elements are arranged in ascending order of their atomic masses every eighth element had properties similar to the properties of first element, just as eighth note of a musical octave is same as its first note.

In which way was Newland’s Law of Octaves comparable to a musical note.
Answer:
As in above Question 5.

How did Mendeleeff arrange the elements in the periodic table.
What was the basis of his classification.
Answer:
Mendeleeff arranged the elements in the increasing order of their atomic weights. Basis of classification was that properties of elements are periodic functions of their atomic weights.
i.e. “Elements with similar properties appear at regular intervals.”

“Physical and chemical properties of elements are periodic function of their atomic masses.”
Every ninth element resembles in properties with first element and tenth element with second and so on. That is after regular interval. This means elements in the same vertical column the properties resemble.

State the contributions made by Mendeleeff towards the periodic table.
Answer:

What were the defects and anomalies in Mendeleeff’s Periodic Table and how are they resolved by Moseley. (a) Number of electron shell remains the same.
(b) Valence electrons increases by one.
Transition from metallic to non-metallic character increases.
(c) Size of atom decreases.

Write short notes on the following types of elements –

(a) Alkali metals : Elements of I-A group like Li, Na, K, Rb, Cs, fr are called alkali metals because these metals react with water to form alkalis and hydrogen.
(b) Alkaline earth metals : Elements of group II-A Be, Mg, Ca, Sr, Ba, Ra are called alkali earth metals as oxides of all these metals are alkaline in nature.
(c) Halogens : Elements of groups 17 (F, Cl, Br, I, At.) are called Halogens as they react with water to form acids.
(d) Noble gases : Element of 18th or O group (He, Ne, Ar, Kr, Xe, Rn) are called noble gases as they are inert gases and have valency 6. All are mono-atomic.
(e) Transition and inner transition elements

(f) Normal elements OR Representative elements : “Elements of groups 1, 2, 13, 14, 15, 16, 17 which have all inner shells completely filled with electrons. Only outermost shells are incomplete are called normal elements.” 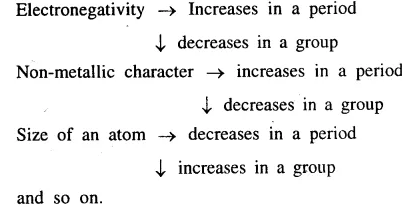 Name or state following with reference to the elements of the first three periods of the periodic table.

Q.1. Select the correct answer from the words in bracket.

Q.2. Fill in the blanks from the words A to F given below’.

Q.3. Give reasons for the following.

1. Mendeleeff’s contributions to the periodic table, laid the foundation for the Modern Periodic Table.
2. Properties of elements are periodic functions of their atomic numbers and not atomic weights.
3. A transition from metallic to non-metallic elements is seen on moving from left to right in a period of the periodic table.
4. Noble gases do not form compounds readily.
5. Group 1 [IA] elements are called alkali metals.

1. Mendeleeff found that there was close relation between atomic weights and properties of elements. He also found that when elements are arranged in increasing order of their atomic weights, the properties repeat at regular interval.
He even left some gaps for the elements not know at that time whose properties resembled the neighbouring elements. Predicted properties of eKa Aluminium (before discovery) are exactly the same as actual properties of gallium element (after discovery).
Moreover he arranged all the 63 elements known at that time. Still there were many draw-backs in this periodic table, but Mendeleeff laid the foundation of modern periodic table.

Number of electrons in an atom, it helps in arranging the elements according to their electronic configuration so the bases of atomic number is better than atomic mass.
3. In a period valence electrons increase from 1 to 7. But shell remains the same. Element having valence electron 1, 2, 3 lose electrons and are metals on the left. And elements having 5, 6, 7 valence electrons gain electrons and become non – metals are on the right of periodic table.
Hence transition from metallic to non-metallic character is seen from left to right a period.
4. Noble gases do not form compounds readily as noble gases have their outer most orbit completely filled and have stable configuration.
5. Elements of I-A group are metals, react with water to form alkalis.

Q.5. Match the elements of List-I with their type from List-II. 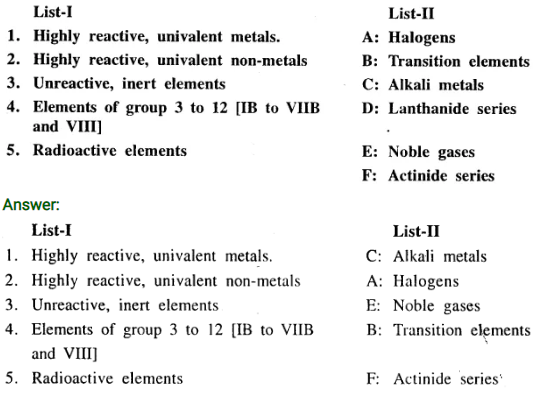 Q.6. Complete the table pertaining to the following elements given in Column 1.