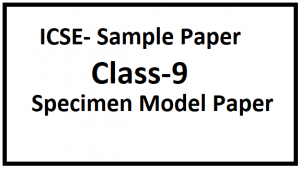 Answers to this Paper must be written on the answer sheet provided separately.
You will not be allowed to write during the first 15 minutes.
This time is to be spent in reading the question paper.
The time given at the head of this Paper is the time allowed for writing the answers.
Attempt seven questions in all.
Part I is compulsory. All questions from Part I are to be attempted.
A total of five questions are to be attempted from Part II.
The intended marks for questions or parts of questions are given in brackets [ ].

(i) In all Map Work, make wise use of arrows to avoid overcrowding of the map.
(ii) The Map given at the end of this question paper must be detached, and after
marking, must be fastened to your answer booklet.
(iii) All sub-sections of the questions attempted must be answered in the correct
serial order.
(iv) All working including rough work should be done on the same answer sheet
which is used to answer the rest of the paper.

(a) Why are the lines of longitudes also called meridians? [2]

(i) What are the Jet streams?
(ii) State any one importance of Jet streams. [2]

With reference to the Natural regions of the world answer the following:
(i) Why does the Taiga region not exist in the Southern hemisphere?
(ii) Prairies are called the granaries of the world. [2]

(i) How does the rotation of the earth influence the direction of the ocean currents? [2]

(i) What is Coriolis Effect?
(ii) How does it affect the planetary winds? [2]

Attempt any five questions from this Part

(i) Why are latitudes also called parallels of latitude?
(ii) Why are all the lines of longitude of the same length?
[2]

State two effects of the rotation of the earth. [2]

(c) Give a geographical reason for each of the following:

(i) Great circles are the shortest routes between two places.
(ii) The Earth is a habitable planet.
(iii) Kuala Lumpur rotates faster on the Earth’s axis than London. [3]

Draw a neat labelled diagram showing the position of the Earth during summer solstice. [3]

(a) What is the composition of the Earth’s Crust?

(i) Differentiate between intermont plateau and volcanic plateau.
(ii) Give an example of residual mountain and an example of depositional plain. [2] (c) Draw a neat well labelled diagram of the Rock Cycle. [3] (d) Give a reason for each of the following:
(i) Igneous rocks are also called Primary rocks.
(ii) Fossils are present in Sedimentary rocks.
(iii) The core of the Earth is in a semi-solid state. [3]

(a) Name any two types of volcanoes giving one example of each type.[2]
(b) Define the following terms:
(i) Epicentre
(ii) Focus [2] (c) Give a geographical reason for each of the following:
(i) Volcanic activity and earthquakes occur in the same belt.
(ii) All rivers do not form a delta.
(iii) Chemical weathering is more common in the tropical regions.
[3] (d) Explain the meaning of the following terms:
(i) Deflation hollow
(ii) River meander
(iii) Block disintegration.

(a) State four factors that affect the movement of ocean currents. [2] (b) Draw a neat and well labelled diagram showing the two types of tides. [2] (c) Give a reason for each of the following:
(i) Newfoundland has rich fishing grounds.
(ii) The eastern coast of Japan is warm even in January.
(iii) The tidal range differs from one water body to the other.
[3] (d) State three ways in which oceans are important to us. [3]

(a) “Higher the latitude, lower is the temperature.”
Justify the statement with an example.
[2] (b)

(i) What is the cause of ozone depletion?
(ii) State the impact of ozone depletion on human life.
[2] (c) Give a reason for each of the following:
(i) The snow on the slope of Himalayas in Nepal melt faster than that on the
slope towards Tibet.
(ii) Tropical deserts have a large annual range of temperatures.
(iii) Equatorial regions have low atmospheric pressure throughout the year.
[3] (d) Draw a neat labelled diagram of the structure of the Earth’s atmosphere. [3]

(a) Name the region in which the following local winds blow:
(i) Chinook
(ii) Mistral
(iii) Foehn
(iv) Loo [2]

Draw a well labelled diagram of sea breeze. [3] (d) Give a reason for each of the following:
(i) Roaring forties and furious fifties are found in the Southern hemisphere.
(ii) Low atmospheric pressure prevails over the circum polar region.
(iii) Cyclones are always followed by anticyclones. [3]

(a) Distinguish between absolute and relative humidity. [2] (b)

(i) Name the type of rainfall experienced in the Equatorial region.
(ii) State two characteristic features of the rainfall mentioned by you. [2] (c)

(i) How is dew formed?
(ii) How is frost different from dew?
(iii) Why is fog commonly formed in the winter season? [3]

Give a reason for each of the following:
(i) A rain shadow area is generally dry.
(ii) Frontal rain is common in mid latitudes.
(iii) Convectional rainfall is also called 4 o’clock rainfall. [3]

(a) Explain how industrial waste and vehicular emission act as the source of air
pollution. [2] (b) Which health hazards are associated with radioactive waste? [2] (c)

(i) What is organic farming?
(ii) Why is this form of farming gaining popularity in recent times? [3] (d) Discuss how individuals may reduce energy consumption to create a cleaner and
eco-friendly world. [3]

(a) Why are tropical deserts found along the western margins of the continents? [2] (b) Name the economic activities practised in the tropical grasslands. [2] (c) Give a reason for each of the following:
(i) “The Equatorial region is also called the lungs of the world.”
(ii) The trees found in the Mediterranean region have long roots and thick barks.
(iii) Tundra region has a low annual range of temperature. [3] (d)

(i) What type of climate is experienced in the north-western part of Europe?
(ii) What is the human response to the typical climate of this region?[3