Define : (a) Elements (b) Compounds.
Name the particles from which elements and compounds are made of.
Answer:
(a) Elements : An element is defined as a pure substance made up of only one kind of atoms that cannot be converted into anything simpler than itself by any physical or chemical process.

(b) Compounds : Compounds are pure substances composed of two or more elements in definite proportion by mass and has a definite set of properties. Compound is made up of only one kind of molecules.

Give two examples for each of the following :
(a) Metals
(b) Non-metals
(c) Metalloids
(d) Noble gases

Give three differences between metals and non-metals.
Answer:
Metals

How is sodium chloride different from its constituent elements, sodium and chlorine ?
Answer:
Sodium is a metal that is stored in kerosene oil as it reacts very fast with air and water. Chlorine is a reactive greenish yellow gas which is poisonous. When these two elements combine chemically they form common salt sodium chloride which is non poisonous colourless solid substance that we use in our food to add taste and to obtain some nutrition.

Give two examples for each of the following :

What is the proportion of elements present in the following compounds? 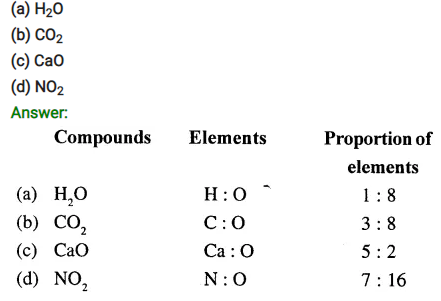 Answer:
(a) Atom : An atom is the smallest indivisible unit of an element which exhibits all the properties of that element and may or may not have independent existence.

(b) Molecule : A molecule can be defined as the smallest unit of an element or a compound which exhibits all the properties of that element or compound and has independent existence. They are divisible into atoms.

(c) Atomicity : The number of atoms in a molecule of an element is called its atomicity.

(d) Formula : Formula is a short way of representing the molecule of an element or a compound.

State the informations obtained from the formula of a compound.
Answer:
A formula gives us the following information about a compound. 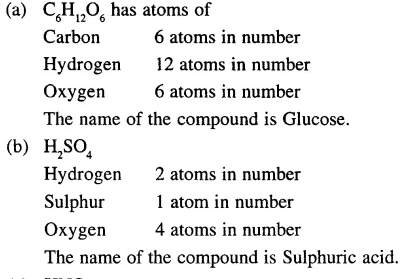 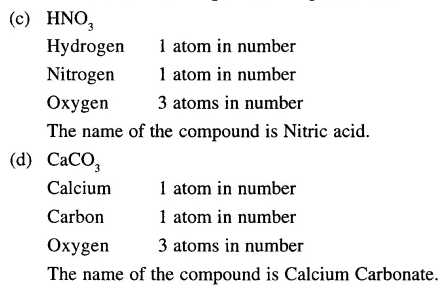 (e) Plastic is used as insulator as it is bad conductor of electricity.

Give one use of each of the following substances :

(a) A frying pan is made up of steel but its handle is made up of wood.
(b) Graphite is used to make lead of the pencils.
(c) Argon is filled in electric bulbs.

(a) Steel is good conductor of heat to cook food, pan is made of steel where as wood is insulator of heat and to hold, handle is made up of wood.
(b) Graphite leaves mark on the paper and makes it black.
(c) Argon is inert gas and protects the element of bulb from oxidation and burning. Hence increases bulb’s life.

(a) Why are copper and aluminium used to make electric wires?
(b) What do you understand by the statement: ‘metals are ductile and malleable’?
(e) Give the advantages of using symbols instead of names of elements or compounds.
(d) When iron is mixed with sulphur at room temperature, it does not form a compound. Why?
(e) Find the atomicity of the Tollowing molecules:

(d) When iron is mixed with sulphur at room temperature, it does not form a compound because the mixture of iron and sulphur requires heat to form a compound i.e. iron sulphide. 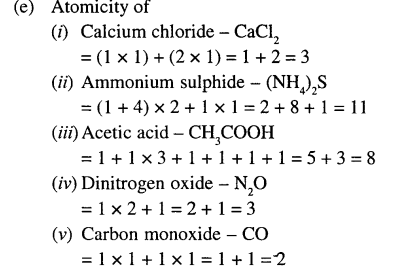 1. Fill in the blanks

(a) ………… refers to the number of atoms in the molecule of an element.

(b) The most abundant element in the earth’s crust is ……..

The most abundant element in the earth’s crust is oxygen.

(c) A metal which is a liquid at room temperature is……….

A metal which is a liquid at room temperature is mercury.

(d) The most abundant element in the atmosphere is ………

The most abundant element in the atmosphere is nitrogen.

(e) A metal which is a poor conductor of electricity is ……..

A metal which is a poor conductor of electricity is tungsten.

A diatomic gaseous element is oxygen.

A liquid non-metal is bromine. 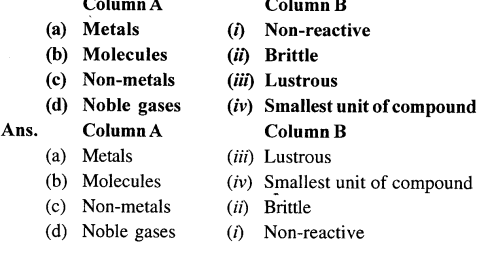 3. Indicate whether the following statements are true or false.

(b) Metals reflect light and are good conductors of electricity.
Answer. True

(i) Ozone is a triatomic molecule.
Answer. True

Tick (√) the correct alternative from the choice given for the following statements :

1. All pure substances have

a definite set of properties

2. Sugar is a compound which consists of the elements

3. Atoms of different kinds combine to form molecules of

4. Sulphur and carbon are

5. Gold is used to make jewellery because

6. The most abundant elements in the universe are

7. The compound used as common salt is

8. Brass and bronze are

9. Sand is a compound of

10. From the list given below select the correct substance which is most suitable to the statements given : (oxygen, diamond, zinc, graphite, gold)