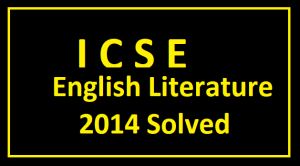 Poetry – Section B ( Not in Current Syllabus )

Read the extract given below and answer the questions that follow:
Lady Adela: Oh! Why did I ever ask that wretch De Levis? I used to think him pathetic. Meg—did you know—Ronald Dancy’s coat was wet? The General happened to feel it.
Margaret: So that’s why he was so silent.
Lady Adela: Yes; and after the scene in the Club yesterday he went to see those bookmakers, and Goole—what a name! — is sure he told Dancy about the sale.
Margaret: [Suddenly] I don’t care. He’s my third cousin. Don’t you feel you couldn’t, Adela?
Lady Adela: Couldn’t—what?
Margaret: Stand for De Levis against one of ourselves?
(i)

Which ‘sale’ is Lady Adela talking about? Why does De Levis claim Dancy knew about the sale? [3]
(ii)

How does Margaret assess Dancy’s character a little later during this conversation? [3]
(iii)

Why does De Levis come to Dancy’s flat soon after? What appeal does Mabel make to him? [3]
(v)

What were De Levis’ reasons for being so stubborn in pursuing the case? What is his reaction after the charge against Dancy is established? [4]

Lady Adela is talking about the sale of the Rosemary filly which was sold by De Levis to Kentman, the bookie, for an amount of nine hundred and seventy pounds. The filly was gifted by Dancy to De Levis.
De Levis was sure that Dancy knew about the sale because Goole told about the sale to Dancy.
(ii)

Margaret says about Dancy that Dancy is the type of man who simply can’t live without danger. If there’s no excitement going, they’ll make it. She says that she has seen Dancy do the maddest things for no mortal reason except the risk.

Dancy says that apart from that much, (the accusation made by De Levis) that was a ghastly tame-cat sort of life, (life without excitement). So he thinks it would be better to go to Nairobi.
Mabel is bothered about what others would say. She says that it looks like running away and they must stay and fight it. She also questions Dancy that if she was accused of stealing pearls, what would he think of her, if she ran away from it.
(iv)

De Levis came because Dancy had come round to his rooms when he was out.. The day before he had threatened him, De Levis didn’t want Dancy to think that he was afraid of him.
She appealed to him to behave as a gentleman to them just as he should want them to behave towards him. She told him to withdraw that wicked charge, and write an apology which Dancy could show.

De Levis says, “I am only a—damned Jew, not a gentleman.” He says that otherwise he would have spared them but when his race is insulted, he is ready to face Dancy at home, or in the court.
When the charge is established, De Levis says that he would willingly resign from the membership of the club mid promises to see them in the court.
At Dancy’s home, he tears the apology letter into two and flings into the fire

Read the extract given below and answer the questions that follow:
[The young clerk is ushering in Dancy, whose face is perceptible harder than it was three months ago, like that of a man who has lived under great restraint] Dancy: He wanted to see me before the court sat.
Young clerk : Yes, sir. Mr. Twisden will see you in one minute.
He had to go out of town last night.
Dancy: Were you in the war?

What reply does the clerk give? How is Dancy’s attitude towards civilian life different from the clerk’s? [3]

What information does Twisden give Dancy and why does he advise Dancy to go to Morocco? [3]

What is Colford’s reaction when reality comes to light?
How does Margaret offer to help Dancy? [3]

When Dancy reaches home soon after, why is Mabel surprised to see him? What plea does she make to the Inspector on the arrival of the police? [3]

How does Dancy commit suicide? Why does he call his death another jump? What term does Colford use to describe Dancy’s suicide? [4]

The clerk says, “yes” he was in the war. The clerk found it as a trouble to stick to that kind of a lifestyle, whereas Dancy finds it difficult to stick to a civilian lifestyle. He gets no excitement from year’s end to year’s end. It’d drive him mad.

Twisden tells Dancy that after the court rose the day before, they had a man called Ricardos.
Ricardos accepted that Dancy had given his danghter one thousand pounds, who was a great friend of Dancy, as a settlement as Dancy married Mabel. Two notes of that amount were in possession of Twisden and were a clear evidence against Dancy. So Twisden gives him an advise to go to Morocco where a war was going on, since it would suit Dancy’s reckless lifestyle. Also, Twiden told Dancy that he had lost his honour and he couldn’t save his wife’s peace of mind. So he would better go.

Colford reacts emotionally saying that if it were his own brother, he couldn’t feel it more. Margaret offers Twisden to put up her pearls up the spout again and pay back the money to De Levis and anyhow save Ronny.

Mabel thought that Dancy was supposed to be in the courts but when he comes home, she is surprised, saying, “why are you back?”
Mabel requests the inspector to come back in half an hour.

Dancy is in a room when the inspector comes. He locks the room from inside. Then, knowing that he had lost it all and there was po way out of it, he opens the door and says, “you can come in now” and simultaneous shoots himself with a pistol.
Knowing that it was the only decent thing he could do, he calls his suicide as another dangerous jump, a leap that would spare him a lot of disgrace and dishonour.
Colford uses the term Hara-Kiri.
Hara-Kiri: The Samurai, a warrior group in Japan, formerly practised a ritual of committing suicide by cutting open thleir bowels. This they did to save themselves from the disgrace and dishonour in the hands of their enemies.

Read the extract given below and answer tile questions that follow:
In the end they finished the harvest in two days less time than it had usually taken Jones and his men. Moreover it was the biggest harvest that the farm had ever seen. There was no wastage whatever; the hens and ducks with their sharp eyes had gathered up the very last stalk. And not an animal on the farm had stolen so much as mouthful.
All through that summer the work of the farm went like clockwork. The animals were happy as they had never conceived it possible to be.
(i)

What problems did the animals face in the beginning? What work did the pigs do? [3]
(ii)

Give any three examples of how the animals worked together in harmony to take care of the farm. [3]
(iii)

What was the colour of the flag that was hoisted every Sunday? and What design did it have? What was the significance of the design? [3]
(iv)

Point out the differences in the characters of Snowball and Napoleon. Cite instances to support your answer. [4]

How did Frederick trick the animals? Give a detailed account of the Battle of the Windmill which was fought between the animals and Frederick and his men. [16]

To Sir, With Love: E.R. Braithwaite

Read the extract given below and answer the questions that follow:
The Half-Yearly report of the Students’ Council was on November 15, and was one of the important days in the calendar of Greenslade School. I hod heard quite a deal about these occasions and became as excited as the children as the day approached. It was entirely their day, arranged, presented and controlled by them. I observed the activities of my class as they prepared for it, nothing with pride the business-like way in which task were allocated and fitted into a neat programme.
(i)

What explanation of the Council’s purpose and activities did Miss Joseph present? [3]
(ii)

Why did Fernman display a skeleton during his presentation? [3]
(iii)

What aspects of the school’s curriculum did Denham criticize in his report? [3]
(iv)

How many teachers were called on stage to answer the questions of the student?
What does Braithwaite say in praise of the manner in which Miss Phillips answered the questions? [3]
(v)

Why did Weston cut a very ridiculous figure? Why did Denham consider P.T. to be a waste of time?  [4]