Explain giving two examples each of :

(a) The forces which act on bodies when they are in physical contact are called contact forces.

(b) The forces experienced by bodies even without being physically touched are called non-contact forces.

(c) Force of tension in a string

Contact force: (a) frictional force (b) normal reaction force (c) force of tension in a string

Give one example in each case where :

(b) Force is at a distance

(a) Force exerted on two bodies during collision.

(b) Magnetic force between magnetic poles.

(a) A ball is hanging by string from the ceiling of the roof. Draw a neat labelled diagram showing the forces acting on the ball and the string.

(b) A spring is compressed against a rigid wall. Draw a neat and labeled diagram showing the forces acting on the spring.

(c) A wooden block is placed on a table top. Name the forces acting on the block and draw a neat and labelled diagram to show the point of application and direction of these forces. The forces acting on the block are its weight in the downward direction and the normal reaction force due to the table on the upward direction. 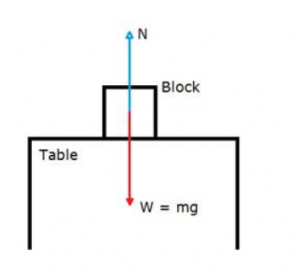 State one factor on which the magnitude of a non-contact force depends. How does it depend on the factor stated by you?

The magnitude of non-contact force on two bodies depends on the distance of separation between them.

The force decreases as the distance of separation increases.

The force is inversely proportional to the square of the distance of separation.

The separation between two masses is reduced to half. How is the magnitude of gravitational force between them affected?

State the effects of a force applied on

How does the effect of the force differ in the two cases?

A force when applied on a non-rigid body changes the inter-spacing between its constituent particles and therefore causes a change in its dimensions and can also produce motion in it.

Give one example in each of the following cases where a force:

(c) Changes the size of a body.

(d) Changes the shape of a body.

(a)A fielder on the ground stops a moving ball by applying a force with his hands.

(b) The pull exerted by horse makes a cart moves.

(c) In a cycle pump, when the piston is lowered, the air is compressed to occupy a less volume.

(d) On pressing a piece of rubber, its shape changes.

(a) Force of reaction

(b) Force due to gravity

Force due to gravity is a non-contact force.