Differentiate between the scalar and vector quantities, giving two examples of each.

Differentiate between the scalar and vector quantities

Question 2( Motion in One Dimension)

State whether the following quantity is a scalar or vector?

a) Pressure is a scalar quantity.

b) Momentum is a vector quantity.

c) Weight is a vector quantity.

d) Force is a vector quantity.

e) Energy is a scalar quantity.

f) Speed is a scalar quantity.

When is a body said to be at rest?

A body is said to be at rest if it does not change its position with respect to its immediate surroundings.

When is a body said to be in motion?

A body is said to be in motion if it changes its position with respect to its immediate surroundings.

What do you mean by motion in one direction?

When a body moves along a straight line path, its motion is said to be one-dimensional motion.

Its SI unit is metre (m)

Differentiate between distance and displacement.

Can displacement be zero even if the distance is not zero? Give one example to explain your answer.

Yes, displacement can be zero even if the distance is not zero.

For example, when a body is thrown vertically upwards from a point A on the ground, after sometime it comes back to the same point A. Then, the displacement is zero, but the distance travelled by the body is not zero (it is 2h; h is the maximum height attained by the body).

When is the magnitude of displacement equal to the distance?

The magnitude of displacement is equal to distance if the motion of the body is one-dimensional.

The velocity of a body is the distance traveled per second by the body in a specified direction.

Its SI unit is metre/second (m/s).

Define speed. What is its S.I. unit?

The speed of a body is the rate of change of distance with time.

Its SI unit is metre/second (m/s).

Distinguish between speed and velocity.

Speed is a scalar quantity, while velocity is a vector quantity. The speed is always positive-it is the magnitude of velocity, but the velocity is given a positive or negative sign depending upon its direction of motion. The average velocity can be zero but the average speed is never zero.

Which quantity-speed or velocity-gives the direction of motion of a body?

Velocity gives the direction of motion of the body.

When is instantaneous speed the same as the average speed?

Give an example of the motion of a body moving with a constant speed but with a variable velocity. Draw a diagram to represent such a motion.

The motion of a body in a circular path with uniform speed has a variable velocity because in the circular path, the direction of motion of the body continuously changes with time. 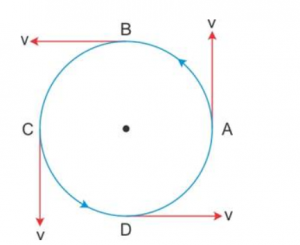 Question 18  Motion in One Dimension Concise

Give an example of motion in which the average speed is not zero but the average velocity is zero.

If a body starts its motion from a point and comes back to the same point after a certain time, then the displacement is zero, average velocity is also zero, but the total distance traveled is not zero, and therefore, the average speed in not zero.

Acceleration is the rate of change of velocity with time.

Distinguish between acceleration and retardation.

What is meant by the term retardation? Name its S.I. unit.

Retardation is the decrease in velocity per second.

Which of the quantity-velocity or acceleration-determines the direction of motion?

Velocity determines the direction of motion.

Give one example of each type of following motion:

(a) Uniform velocity (b) Variable velocity

Answer 24 Motion in One Dimension

Question 25  Motion in One Dimension Concise

The diagram (Fig. 2.6) below shows the pattern of the oil dripping on the road at a constant rate from a moving car. What information do you get from it about the motion of the car.

Define the term acceleration due to gravity. State its average value.

‘The value of g remains the same at all places on the Earth’s surface’. Is this statement true? Give reason for your answer.

No. The value of ‘g’ varies from place to place. It is maximum at poles and minimum at the Equator on the surface of the Earth.

Question 28 Motion in One Dimension

If a stone and a pencil are dropped simultaneously in vacuum from the top of a tower, then which of the two will reach the ground first? Give reason.

In vacuum, both will reach the ground simultaneously because acceleration due to gravity is same (=g) on both objects.

The vector quantity is :

Velocity is a vector quantity. The others are all scalar quantities.

The S.I. unit of velocity is

The unit of retardation is

Question 4 Motion in One Dimension

A body when projected up with an initial velocity u goes to a height h in time t and then comes back at the point of projection. The correct statement is

(b) The acceleration is zero.

(c) The final velocity on reaching the point of projection is 2 u.

(d) The displacement is zero.

(d) The displacement is zero.

Speed of car in ms-1

Express each of the following in m s-1. 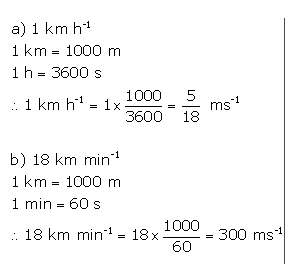 Question 4 Motion in One Dimension Concise

A train takes 3 hours to travel from Agra to Delhi with a uniform speed of 65 km h-1. Find the distance between the two cities.

Answer 7 Motion in One Dimension Concise

(ii) Average velocity of the train is zero because the train stops at the same point from where it starts, i.e. the displacement is zero.

A car moving on a straight path covers a distance of 1 km due east in 100 s. What is (i) the speed and (ii) velocity of the car?

(i) Speed of the car = Distance/time taken

Question 9  Motion in One Dimension Concise

A body starts from rest and acquires a velocity 10m s-1 in 2 s. Find the acceleration.

A car starting from rest acquires a velocity 180m s-1 in 0.05 h. Find the acceleration.

A body is moving vertically upwards. Its velocity changes at a constant rate from 50 m s-1 to 20 m s-1 in 3 s. What is its acceleration?

Negative sign here indicates that the velocity decreases with time, so retardation is 10 m/s.

A toy car initially moving with uniform velocity of 18 km h-1 comes to a stop in 2 s. Find the retardation of the car in S.I. units.

A car accelerates at a rate of 5 m s-2. Find the increase in its velocity in 2 s.

A car is moving with a velocity 20 m s-1. The brakes are applied to retard it at a rate of 2 m s-2. What will be the velocity after 5 s of applying the brakes?

Let ‘v’ be the final velocity.

We know that, Acceleration = Rate of change of velocity /time

Question 15  (Motion in One Dimension Concise)

A bicycle initially moving with a velocity 5.0 m s-1 accelerates for 5 s at a rate of 2 m s-2. What will be its final velocity?

Initial velocity of the bicycle, u = 5 m/s

Let ‘v’ be the final velocity.

We know that, acceleration = Rate of change of velocity/time

Question 16 Motion in One Dimension Concise

Initial velocity of the bicycle, u = 18 km/hr

(iii) Let ‘V’ be the speed of the car after 2 s of applying the brakes.