A reference frame attached to the earth cannot be an inertial frame because the earth is revolving around the sun and also rotating about its axis.

According to Newton’s second law which says that net force acting on the particle is equal to rate of change of momentum ( or mathematically F = ma),  so if a particle is at rest then

Now, if the frame is inertial, then the resultant force on the particle is zero.
If the frame is non-inertial,
vector sum of all the forces plus a pseudo force is zero.
i.e. Fnet ≠ 0.

The figure (5-Q.3) shows the displacement of a particle going along the X-axis as a function of time. The force acting on the particle is zero in the region 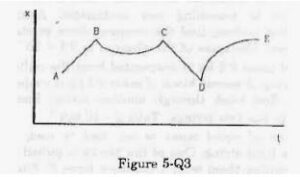 Slope of the x-t graph gives velocity. In the regions AB and CD, slope or velocity is constant, i.e. acceleration is zero. Hence, from the second law, force is zero in these regions.

The figure (5-Q.4) shows a heavy block kept on a frictionless surface and being pulled by two ropes of equal mass m. At t = 0, the force on the left rope is withdrawn but the force on the right end continues to act. Let F1 and F2 be the magnitudes of the forces exerted by right rope and the left rope on the block, respectively.

The option, (a) is correct

It means normal force exerted by the floor of the elevator on the person is greater that the weight of the person.
i.e. N > mg

Tension in the cable = Weight of the elevator
Or, total upward force = total downward force
That is, there’s no acceleration or uniform velocity.
So, the elevator is going up/down with uniform speed.

A particle is observed from two frames S1 and S2. Frame S2 moves with respect to S1with an acceleration a. Let F1 and F2 be the pseudo forces on the particle when seen from S1 and S2, respectively. Which of the following is not possible?

The option, (d) is correct

A person says that he measured the acceleration of a particle to be non-zero even though no force was acting on the particle.

(a) He is a liar.
(b) His clock might have run slow.
(c) His metre scale might have been longer than the standard.
(d) He might have used a non-inertial frame.

The option, (d) is correct

If no force is acting on a particle and yet, its acceleration is non-zero, it means the observer is in a non-inertial frame.