Two, or more Progressive waves can travel simultaneously in a medium without affecting the motion of one another, Therefore, the resultant displacement of each particle of the medium at any instant is equal to the vector sum of the displacements produced by the two waves separately. This principle is called principle of superposition

Meaning of principle of superposition :

The principle of superposition means that if a number of waves are travelling in a medium, then each one travels independently as if the other waves were not present at all; the shape and other characteristics of any wave are not changed.

When two waves of same frequency travel in a medium simultaneously in the same direction then, due to their superposition, the resultant intensity at any point of the medium is different from the sum of intensities of the two waves. At some points the intensity of the resulatant wave is very large while at some other points it is very small or zero. This phenomenon is called the interference of waves.

Constructive interference takes place when the crest of one wave falls on the crest of another wave such that the amplitude is maximum. These waves will have the same displacement and are in the same phase.

In destructive interference the crest of one wave falls on the trough of another wave such that the amplitude is minimum. The displacement and phase of these waves are not the same. 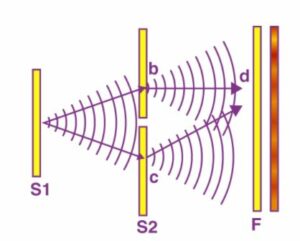 Conditions for Interference of Light Waves

For sustained interference of light to occur, the following conditions must be met:

If two waves of exactly same frequency and of amplitude a and b interfere, then amplitude of resultant wave is given by

where φ is the phase difference between two waves.

where I1 and I2 are intensities of two waves.

Where ω1 and ω2 are width of slits.

where, D = distance of screen from slits, λ = wavelength of light and d = distance between two slits.

Law of conservation of energy in constructive & Destructive interference :

When a transparent sheet of refractive index μ and of thickness t is introduced in one of the path of interfering waves, then fringe pattern shifts in that direction by a distance Y

It is a combination of two prisms of very small refracting angles placed base to base. It is used to obtain two coherent sources from a single light source.

The shape of interference fringes are usually hyperbolic.

When screen is held at 900 to the line joining foci of the hyperbola, the fringes are circular.

When distance of screen (D) is very large compare to the distance between the slits (d), the Cringes are straight.

The bending of light waves around the corners of an obstacle or aperture is called diffraction of light.

(a) Fresnel class
(b) Fraunhofer class

Fraunhofer Diffraction at a Single Slit

where, λ = wavelength of light, a = width of single slit, D = distance of screen from the slit and f = focal length of convex lens.

The phenomena of restructuring of electric vectors of light into a single direction is called polarisation.

Ordinary light has electric vectors in all possible directions in a plane perpendicular to the direction of propagation of light.

A nicol prism is an optical device which is used for producing   plane polarised light and analysing light the same.

The nicol prism consists of two calcite crystal cut at 68° with its principal axis joined by a glue called Canada balsam.

When a beam of completely plane polarised light is incident on an analyser, the intensity of transmitted light from analyser is directly proportional to the square of the cosine of the angle between plane of transmission of analyser and polariser, i.e.,

When a polariser and analyser are perpendicular to each other, then intensity of transmitted light from analyser becomes O.

When unpolarised light is incident at an angle of polarisation (ip) on the interface separating air from a medium of refractive index μ, then reflected light becomes fully polarised, provided

Few double refracting crystals have a property of absorbing one of the two refracted rays and allowing the other to emerge out. This property of crystal is called dichroism.

It is a polarising film mounted between two glass plates. It is used to produce polarised light.

(i) Polaroids are used in sun glasses. They protect the eyes from glare.
(ii) The polaroids are used in window panes of a train and especially of an aeroplane. They help to control the light entering through the window.
(iii) The pictures taken by a stereoscopic camera. When seen with the help of polarized spectacles, create three dimensional effect.
(iv) The windshield of an automobile is made of polaroid. Such a mind shield protects the eyes of the driver of the automobile from the dazzling light of the approaching vehicles

Two waves of equal frequency have their amplitudes in the ratio of 3 : 5. They are superimposed on each other. Calculate the ratio of maximum and minimum intensities of the resultant wave.

In Young’s double slit experiment the distance ……………………………. distance between the fringes ?

In young’s double-slit experiment, the slits …………………………  side of the central bright fringe.

The fringe-width in young’s experiment, when the separation between the slit is 0.5 mm and the distance of the screen from the slits in 1.5 m, is 1.8 mm. Find the path difference  between the interfering waves at the position of first-order maximum.