Which one of the following is the correct route that a sperm follows when it leaves the testis of a mammal?

When pregnancy does not occur, the life of corpus luteum is about:-

In female, after how much time after fertilization, does the fertilized egg get implanted in the uterine wall?

The middle piece of sperm provides:

The normal gestation period in humans is:

(a) The membrane which protects the foetus and encloses a fluid.

(b) The canal through which the testes descend into the scrotum just before birth in human male child.

(c) Uterine wall that is shed during menstruation.

Rewrite the terms in the correct order so as to be in a logical sequence.

(a) The onset of reproductive phase in a female.

(b) Rupture of follicle and release of ovum from the ovary.

(d) Process of fusion of ovum and sperm.

(e) Fixing of developing zygote (blastocyst) on the uterine wall.

(a) The body part in which the testes are present in a human male.

(b) The part where the sperms are produced in the testes.

(c) The fully developed part of the ovary containing a mature egg.

(d) The accessory gland in human males whose secretion activates the sperms.

(e) The tubular knot fitting like a cap on the upper side of the testis.

Choose the odd one in each of the following:

(a) State whether the following statements are TRUE (T) or FALSE (F):

(i) Fertilization occurs in vagina. (T/F)

(iii) Nutrition and oxygen diffuse from the mother’s blood into the foetus’s blood through amnion. (T/F)

(b) Rewrite any two of the wrong statements by correcting only one word either at the beginning or at the end of the sentence.

(i) Fertilization occurs in the fallopian tube.

(ii) Vagina is also known as the birth canal.

(iii) Nutrition and oxygen diffuse from the mother’s blood into the foetus’s blood through placenta.

Complete the following table by writing the name of the structure or the function of the given structure:

Given below are the names of certain stages/substances related to reproduction and found in human body.

Describe the functions of the following:

(a) Inguinal canal : It is the canal which allows the descent of testes along with their ducts, blood vessels and nerves into the abdomen.

(b) Testis : Testis is a male reproductive organ. There a pair of testes present in a scrotal sac descended outside the body cavity. Testes produce sperms which are the male gametes.

(d) Oviduct : A pair of oviduct is present on either side of the uterus. Oviduct carries the released ovum from the ovary to the uterus.

(a) Semen and sperm

(b) Hymen and clitoris

(a) Differences between semen and sperm :

(b) Differences between hymen and clitoris :

(c) Differences between uterus and vagina :

(f) Differences between amnion and allantois :

(b) Hernia : Hernia is an abnormal condition which is caused when the intestine due to the pressure in abdomen bulges into the scrotum through the inguinal canal.

(c) Ovulation : Ovulation is the release of the mature ovum by the rupture of the Graafian follicle.

(d) Puberty : Puberty is the period during which immature reproductive system in boys and girls matures and becomes capable of reproduction.

(f) Hymen : Hymen is a thin membrane which partially covers the opening of the vagina in young females.

Distinguish between the following pairs:

(a) Spermatogenesis and oogenesis

(b) Implantation and gestation

(a) Differences between spermatogenesis and oogenesis :

(b) Differences between implantation and gestation :

(c) Differences between pregnancy and parturition :

(f) Differences between menarche and menopause :

What is the significance of the testes being located in the scrotal sacs outside the abdomen? Can there be any abnormal situation regarding their location? If so, what is that and what is the harm caused due to it?

In an abnormal condition, in the embryonic stage, the testes do not descend into the scrotum. It can lead to sterility or incapability to produce sperms.

Suppose a normal woman has never borne a child. How many mature eggs would she have produced in her lifetime? Your calculation should be based on two clues:-

What are the secondary sexual characters in the human male and female respectively?

(i) Beard and moustache

(i) Breasts in females

What are the accessory reproductive organs?

The accessory reproductive organs include all those structures which help in the transfer and meeting of two kinds of sex cells leading to fertilization and growth and development of egg up to the birth of the baby.

For example: uterus in females, penis in males.

Differentiate between the primary and accessory reproductive organs.

Name and describe very briefly, the stages in the development of human embryo.

(a) After fertilization zygote is formed inside the fallopian tube.

(b) The zygote then divides repeatedly to form a spherical mass of cells known as ‘Morula’.

(c) The morula then develops into a hollow sphere of cells with a surrounding cellular layer and an inner cell mass projecting from it centrally. This stage is known as the ‘blastocyst’. It implants itself into the uterine wall.

(d) From the blastocyst arises an embryo which is around 3 weeks old. It is a tiny organism that hardly resembles human being.

(e) By the end of 5 weeks, the embryo is with a devalued heart and blood vessels.

(f) By the end of 8 weeks, limbs are developed. This stage is known as ‘foetus’.

(g) At the end of nearly 40 weeks i.e. end of gestation period, the infant is born.

Is it correct to say that the testes produce testosterone? Discuss.

Testosterone is the male reproductive hormone produced by the interstitial cells or the Leydig cells. These cells are located in the testes. They serve as a packing tissue between the coils of the seminiferous tubules. Therefore, it can be said that the testes produce the male hormone testosterone.

Given below is a diagram of two systems together in the human body.

(a) Name the systems.

(d) What will happen if the part 3 on both sides gets blocked? 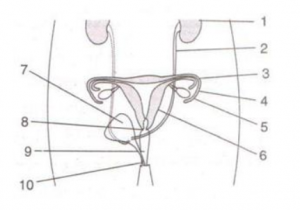 (part 3) Function of Fallopian Tube : The fallopian tubes carry the ovum released from the ovary to the uterus.

(part 4)Function of Infundibulum : Infundibulum is the funnel shaped distal end of the ovary which picks up the released ovum and pushes it further on its passage into the fallopian tube.

(part 6)Function of Uterus : Uterus allows the growth and development of the embryo.

(d) If fallopian tube (part 3) on both sides gets blocked, the ovum released by the ovary will not be pushed into the oviduct and hence, there will be no possibility of fertilisation.

(a) Label the parts indicated by the guidelines 1 to 8.

(b) How does the uterus prepare for the reception of zygote?

(c) What happens to the uterus, if fertilization fails to take place? (b) Oestrogen secreted by the corpus luteum secrets oestrogen. Oestrogen stimulates the thickening of the endometrial wall of the uterus. The uterine wall becomes thickened and is supplied with a lot of blood to receive the fertilized egg.

(c) If fertilization fails to take place, the endometrial lining of the uterus starts shedding on the 28th day of the menstrual cycle. Finally it is discharged out along with the unfertilised ovum as the menstrual flow.

Given below is the schematic diagram of the sectional view of the human male reproductive system. They produce the fluid which serves as the

It produces an alkaline secretion which mixes with the semen and helps neutralise the vaginal acids.

It produces a secretion which serves as a lubricant for the semen to pass through the urethra.

It produces the male gamete sperm and the male sex hormone testosterone.

They carry the sperms from the epididymis to the urethra.

It serves as an outlet for delivering the sperms into the vagina.

The diagram below represents two reproductive cells A and B. Study the same and then answer the questions that follow: (a) Identify the reproductive cells A and B

(b) Name the specific part of the reproductive system where the above cells are produced.

(c) Where in the female reproductive system do these cells unite?

(e) Name an accessory gland found in the male reproductive system and state its secretion.

(b) Sperms are produced in the testis.

The ovum is produced in the ovary.

The diagram given below is that of a developing human foetus in the womb. Study the same and answer the questions that follow:

(b) What term is given to the period of development of the foetus in the womb?

(c) How many days does the foetus take to be fully developed?

(d) Mention two functions of the parts labelled ‘2’ other than its endocrine functions.

(e) Name (any one) hormone produced by the part labelled ‘2’. 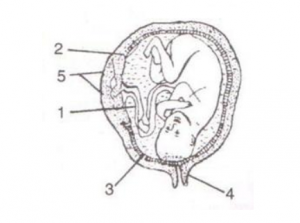 (d) Placenta provides the foetus with oxygen and nutrients. In addition, the placenta also removes carbon dioxide and waste products of the foetus. 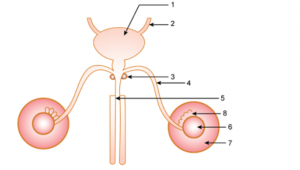