(a) Name the following:

(b) State whether the following statements are true or false. If false, rewrite
the correct form of the statement by changing the first word only:

(i) Cones are photoreceptor cells that are sensitive to dim light.
(ii) The Beta cells of the pancreas secrete insulin.
(iii) Tubectomy is the surgical method of sterilization in man.
(iv) Guttation is the loss of water in the form of water droplets from
hydathodes.
(v) Nephrons are the basic unit of the brain. [5]

(i) Plasma devoid of fibrinogen.

(ii) Movement of water molecules across the cell membrane from
hypertonic to hypotonic solution.
(iii) The stage where chromosomes lie on the equator of the achromatic
spindle.
(iv) Alternative form of a gene on a pair of homologous chromosome.
(v) Period of complete intrauterine development of the foetus. [5]

Given below are five sets with four terms each. In each set one term is
odd. Choose the odd one out of the following terms given and name the
category to which the others belong: [5] 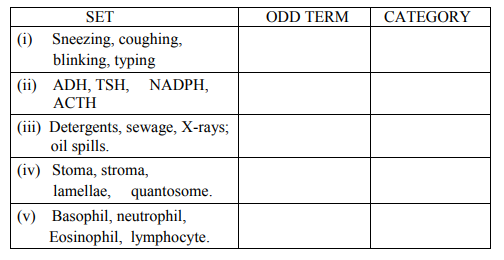 Given below is an apparatus used to study a particular process in plants.
Study the same and answer the questions that follow: 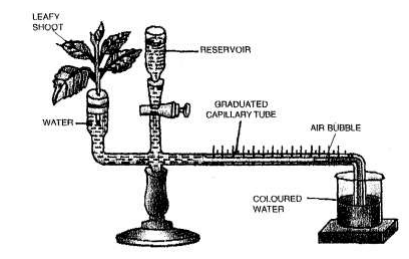 (a) Given below is a diagrammatic representation of a certain part of the process
of circulation of blood in man. Study the same and then answer the questions
that follow: 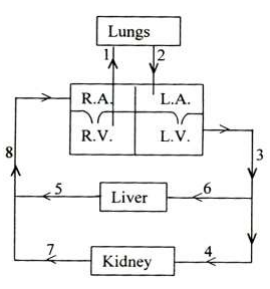 (i) Name the parts labelled 1, 2, 4 and 6.
(ii) Give the number and name of the vessel which contains the maximum
amount of urea a few hours after a protein rich meal.
(iii) Draw a neat, labelled diagram of the cross sectional view of the blood
vessel numbered 3.
(iv) Mention two structural differences between blood vessels ‘3’ and ‘8’. [5]
(b) Differentiate between the following pairs on the basis of what is given in
brackets:
(i) Lymphocytes and Neutrophils. (structure of the nucleus)
(ii) Beginning of the ventricular systole and the end of ventricular systole.
(type of heart sound)
(iii) Prostrate gland and Cowper’s gland. (the nature of secretion)
(iv) Rod cells and Cone cells. (pigment)
(v) Simple goitre and exophthalmic goitre. (cause of the disorder) [5]

(a) Complete the following table by filling in the numbered blanks with an
appropriate term/answer:

(b) (i) Draw a neat diagram of a single Malpighian corpuscle and label the
following parts:
Glomerulus, Bowman’s capsule, Afferent arteriole, and Efferent
arteriole.
(ii) Name and explain the process that occurs in the glomerulus. [5]

(a) Study the diagram given below and then answer the questions that follow: 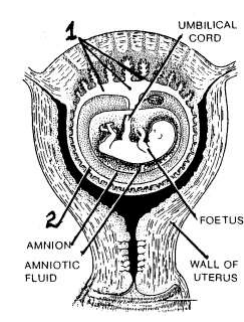 (i) Name the parts labelled 1 and 2. State the functions of each part.
(ii) State any two functions of the amniotic fluid.
(iii) What is the role of the umbilical cord in the development of the
foetus?
(iv) Name the part in the diagram which is endocrine in nature. [5]

(i) State Mendel’s law of Independent Assortment.
(ii) A homozygous Tall plant (T) bearing red coloured (R) flowers is
crossed with a homozygous Dwarf plant (t) bearing white flowers (r):-
(1) Give the Genotype and Phenotype of the F1 generation.
(2) Give the possible combinations of the gametes that can be
obtained from the F1 hybrid.
(3) Give the dihybrid ratio and the phenotype of the offsprings of
the F2 generation when two plants of the F1 generation above
are crossed. [5]

(a) Given below is a diagram depicting a defect of the human eye. Study the
same and then answer the questions that follow: 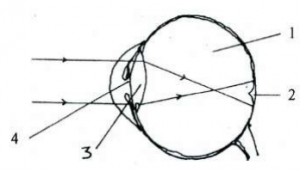 (i) Name the defect shown in the diagram.
(ii) Name two possible reasons for this defect of the eye in human beings.
(iii) Name the parts labelled 1 to 4.
(iv) Draw a labelled diagram to show how the above mentioned defect is
rectified using an appropriate lens. [5]

(i) Mention three reasons for the increase in population in India.
(ii) Write the full forms of NADP and BCG.
(iii) Explain the term antibiotic. Give an example of an antibiotic.
(iv) State any three functions of the World Health Organization. [5]

(i) Explain the term Plasmolysis. Give one application of this
phenomenon in our daily lives.
(ii) Enumerate the steps involved in testing a green leaf for the presence of
starch.
(iii) Mention any three causes of soil pollution. [5]

(i) Draw a neat labelled diagram of the membranous labyrinth found in
the inner ear. Name the part of the structure that is responsible for
static balance in human beings.

(ii) Name the tube which connects the cavity of the middle ear with the
throat.
(iii) Name any two microbial diseases and the vaccines used as preventive
measures for each. [5]

(a) The diagram given below represents a stage during mitotic cell division in
an animal cell:- 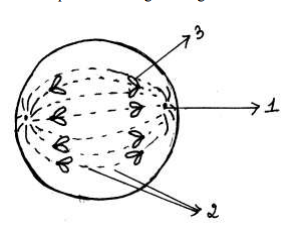 (i) Identify the stage. Give a reason to support your answer.
(ii) Name the parts labelled 1, 2 and 3.
(iii) What is the chromosome number of the cell?
(iv) Draw a neat, labelled diagram of the cell as it would appear in the
next stage. Name the stage. [5]

(b) Give reasons for the following:-

(i) Plants begin to die when excess of soluble fertilizers are added to
the soil.
(ii) Injury to the medulla oblongata results in death.
(iii) Gametes have a haploid number of chromosomes.
(iv) Green leaves are thin and broad.
(v) There is a need to check the present rate of urbanisation. [5]