Note :-  Before Viewing Concise Solutions of Chapter-2 Structure of Chromosomes Cell Cycle and Cell division  . Read the whole chapter carefully with figure. Make a self written notes including following point.

Focus on Mitosis and its stages. A basic understanding of Meiosis (Stage not in Syllabus ) homologous chromosomes and crossing over leading to variations. Significance and major differences between mitotic and meiotic division

A. MULTIPLE CHOICE TYPE of Structure of Chromosomes Selina Biology for ICSE Class-10

(Choose the best option out of the four alternatives a, b, c and d)

The chromatin material is formed of

(b) DNA and Histones

(b) DNA and Histones

(c) both ovary and testis

(c) both ovary and testis

In which one of the following options the two stages of mitosis have been given in correct sequence?

(b) RNA and proteins

(a) The repeating components of each DNA strand lengthwise.

(b) The complex structure consisting of DNA strand and a core of histones.

(c) The type of bond which joins the complementary nitrogenous bases.

(d) The three components of nucleotide.

(d) – Phosphate, Sugar and Nitrogenous base.

Imagine one cell (A) has undergone one mitotic division and another cell (B) has completed its meiotic division. How many cells would the two produce?

Fill in the blanks.

(e) Modern humans have 46 chromosomes. Their sperms and eggs will have ………. chromosomes each.

(f) During the pairing of chromosomes in meiosis, the ………… chromosomes come to lie side by side.

(a) DNA replicates in the synthesis (S) phase of the cell cycle.

(b) Mitosis occurs in our somatic (body) cells.

(e) Modern humans have 46 chromosomes. Their sperms and eggs will have 23 chromosomes each.

(f) During the pairing of chromosomes in meiosis, the homologous chromosomes come to lie side by side.

What is the difference between chromatin fibre and chromosome?

Chromatin fibre is unfolded, uncondensed, extended DNA. It is only visible when cell under goes division whereas chromosomes are condensed DNA and they are visible when the cell is divided.

What are the rungs of the “DNA ladder” made of?

Rungs of DNA ladder is made of nitrogenous bases which includes Adenine (A), Guanine (G), Cytosine (C) and Thymine (T).

Correct the following statements if there is any mistake.

(a) The four nitrogenous bases in the DNA are Guanine, Thiamine, Adrenaline and Cytosine.

(b) Genes are specific sequences of bases on a chromosome.

(c) A nucleotide is composed of a sulphate, a sugar (pentose) and a nitrogenous base.

(e) If there are 46 chromosomes in a cell there will be 23 chromatin fibres inside the nucleus during interphase.

(a) The four nitrogenous bases in the DNA ladder are Guanine, Thymine, Adenine and Cytosine.

(b) Genes are specific sequences of nucleotides on a chromosome.

(c) A nucleotide is composed of a phosphate, sugar (pentose) and a nitrogenous base.

(e) If there are 46 chromosomes in a cell there will be 46 chromatin fibres inside the nucleus during interphase.

State the difference between:

(a) Chromosome and chromatid,

(a) A chromosome is an organized structure of DNA and protein found in cells. It is a single piece of coiled DNA containing many genes, regulatory elements and other nucleotide sequences whereas a chromatid is one of the two copies of DNA making up a duplicated chromosome, which are joined at their centromeres, for the process of cell division (mitosis or meiosis).

(b) The centrosome is an area in the cell where microtubules are produced. Within an animal cell centrosome, there is a pair of small organelles called the centrioles. During animal cell division, the centrosome divides and the centrioles replicate (make new copies) whereas each chromosome in its condensed form consists of two chromatids joined at some point along the length. This point of attachment is called centromere.

(c) An aster is a cellular structure shaped like a star, formed around each centrosome during mitosis in an animal cell whereas spindle fibers are aggregates of microtubules that move chromosomes during cell division.

“First meiotic division is the reduction division”. What does the word ‘reduction’ refer to in this statement?

“Gametes must be produced by meiosis for sexual reproduction”. Why is it so?

Mention whether the following statements are true (T) or false (F). Give reason in support of your answer.

(a) As you grow from childhood to adult hood, your skin cells divide only to replace such cells that are lost from the surface.

(b) The unfertilized human egg has half the number of chromosomes of the body cells.

(c) Nuclear membrane in a mitotically dividing cell remains intact up to the metaphase and disappears only in the telophase.

(d) Mitotic cell division can be a mode of reproduction.

(e) Crossing-over between chromatids can occur only between homologous chromosomes.

(a) False (F); Surface skin cells are continuously lost and replaced by the underlying cells.

(c) False (F); Nuclear membrane disappears in Prophase itself, however it reappears during Telophase.

(d) True (T); Mitotic cell division can be a mode of asexual reproduction in unicellular organisms like amoeba or yeast cell which divides into two daughter cells.

(e) True (T); While the maternal and paternal chromosomes are separating, the chromatid material gets exchanged between the two members of a homologous pair resulting in genetic recombination.

Chromosomes are highly condensed coiled chromatic fibres made of DNA which carries the hereditary material of the organisms.

Gene is a structural and functional unit of heredity and variations. Genes are specific sequences of nucleotides on a chromosome that encode particular proteins which express in the form of some particular feature of the body. In other words, gene is the DNA segment of the chromosome and it controls the expression of characteristics.

Enumerate the various changes that occur in the nucleus of the cell during (a) prophase (b) anaphase of mitotic division.

Changes which occur in the nucleus of the cell during mitosis:

Name and explain the various stages of the cell cycle.

Stages of the cell cycle:

In interphase, cells grow in size and volume and prepare for the next cell division.

It is divided into three phases:

It consists of the following phases:

It occurs in four phases:

Why is meiosis referred to as ‘reductional division’?

Meiosis is a type of cell division in which each daughter cell receives half set of chromosomes. Hence, in meiosis, haploid daughter cells (n) are formed from a diploid parent cell (2n). Since the chromosome number is halved in the daughter cells, meiosis is also known as reductional division.

Given below is a schematic diagram of a portion of DNA. 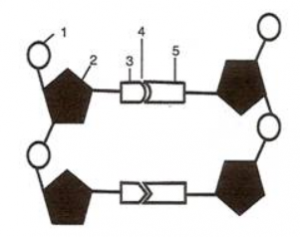 (a) How many strands are shown in the diagram?

(b) How many nucleotides have been shown in each strand?

(d) Name the DNA unit constituted by the parts 1, 2 and 3 collectively.

The three sketches given below (A, B and C) are intended to represent the replication of DNA. What should be their correct sequence starting with the first and ending with the last? ……….. The diagram below represents a stage during cell division. Study the same and then answer the questions that follow: (b) Identify the above stage and give a reason to support your answer.

(c) Mention where in the body this type of cell division occurs.

(d) Name the stage prior to this stage and draw a diagram to represent the same.

(b) The stage described in the diagram is the late anaphase of mitosis in an animal cell. The stage can be identified by the presence of separated chromatids which are found at the two poles of the cell. The appearance of the furrow in the cell membrane classifies the stage as the late anaphase.

(c) The division is mitotic division and this kind of cell division occurs in all the cells of the body except for the reproductive cells.

(d) The stage before anaphase is metaphase.

Draw a labelled diagram to show the metaphase stage of mitosis in an animal cell having ‘6’ chromosomes. The diagram given below represents a certain phenomenon which occurs during meiosis.Name and explain the phenomenon by using the terms – homologous chromosomes, chromatids, and crossing-over. 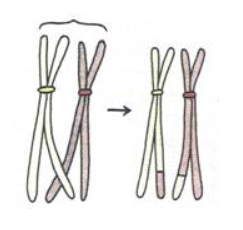 The exchange of chromatids between homologous chromosomes is called crossing-over. This is the process by which the two chromosomes of a homologous pair exchange equal segments with each other.

Since the chromosomes are homologous, breaks at corresponding points mean that the segments that are broken off contain corresponding genes, i.e., alleles. The broken sections are then exchanged between the chromosomes to form complete new units, and each new recombined chromosome of the pair can go to a different daughter sex cell. It results in recombination of genes found on the same chromosome, called linked genes that would otherwise always be transmitted together.

Given below is a diagram representing a stage during mitotic cell division in an animal cell. Examine it carefully and answer the questions which follow. (a) Identify the stage. Give one reason in support of your answer.

(b) Name the cell organelle that forms the ‘aster’.

(d) Name the stage that follows the one shown here. How is that stage identified?

(e) Mention two points of difference between mitosis and meiosis with regard to:

(i) The number of daughter cells produced.

(a) Late prophase. Because the nuclear membrane and nucleolus have disappeared.

(d) Metaphase. The centromeres of chromosomes are drawn to the equator by equal pull of two chromosomal spindle fibres that connects each centromere to the opposite poles, forming a metaphasic plate.

Given below are three diagrammatic sketches (A, B and C) of one and the same particular phase during mitotic type of cell division. (b) What is the diploid number of chromosomes shown in them? …………….

(c) Identify whether these are animal cells or plant cell? Give reasons.

Shown below are four stages (A, B, C, D) (not in sequence) of a certain kind of cell division. (c) What should be the correct sequence of these four stages among themselves? ………………

(d) Name the stage that should precede the earliest of these stages…………..

(e) Draw the stage named above inside the blank space provided.

(a) This is an animal cell because:

(i) The outline is circular (in plants it would be angular {rectangular or polygonal}) and cell wall is absent.

(ii) Centrosomes on centrioles are present. (These are found only in animal cells) 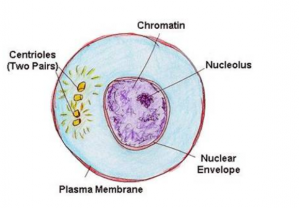 Given below is a diagram representing a stage during mitotic cell division. Study it carefully and answer the questions that follow. 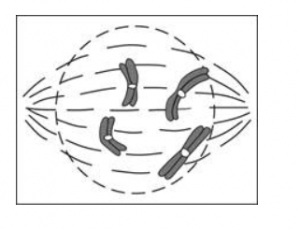 (a) Is it a plant cell or an animal cell? Give a reason to support your answer.

(b) Identify the stage shown.

(c) Name the stage that follows the one shown here. How is that stage identified?

(d) How will you differentiate between mitosis and meiosis on the basis of the chromosome number in the daughter cells?

(e) Draw a duplicated chromosome and label its parts.

(a) It is a plant cell because centrioles are not shown in the diagram.

(c) Metaphase. Chromosomes arrange themselves on the metaphase or equatorial plate.

(d) Difference between mitosis and meiosis based on the chromosome number in daughter cells: